In case you need to go to the hospital in Sri Lanka, don’t worry – they will take excellent care of you.

I fell into a construction hole on the second day of my trip and got injured quite badly. This in itself is probably the very definition of bad news, but there is an upside to this experience as well: I can tell you that going to the hospital in Sri Lanka is not that bad.

My friend and I were walking on the main street in Uppuveli at night. Unfortunately I did not see the construction hole on the side of the street and fell in. In case you are wondering: no, we were not drunk 🙂 I managed to get our of there myself, but I was in shock. There was blood everywhere, I was in pain and it took me several hours to actually realize what had happened. This is probably why I ended up not going to the hospital right away.

In the morning I realized that I definitely needed to go to the hospital. Thussi, the owner of our hotel was really concerned and took us to a private hospital in Trincomalee with his car. Being used to the sterile hospitals in Germany it felt frightening to come to a place, which was not exactly clean…

Luckily, I did not have to wait long. The examination took place in a room with dirty floors and furniture that looked like it was about 100 years old. The nurses could tell I was scared, so my friend Sarah and Thussi got to join me during the examination. The doctor spoke English very well, the nurse kept smiling at me the entire time. They did their best to make me feel comfortable and were really patient with me.

I basically ripped off all the skin on my big toe, had big scratches on my feet, my legs, my ribs and my back and had a very hard time breathing. The doctor used gloves to check out my foot, asked me if I had any allergies and was concerned that I broke my ribs, so he ordered an x-ray. When I asked him what he would do in case my ribs were broken he laughed at me (in a nice way) and said that this was a typically western response – to worry about something before it actually happens. Not very buddist-like I guess, so I did my best to stay in the moment.

Next came the hard part. I got some painkillers and the nurse led me to a little space underneath a staircase, which looked like a storage room. She asked me to sit down and brought in a semi-clean cafeteria tray with some utensils on it. First I got a tetanus shot, fresh out of the sealed package, which was a big relief. And then she cleaned and dressed the wounds very thoroughly. I am not gonna lie, it hurt like hell and I was biting my friends’ arm to get through it, but they did an excellent job.

Once the wounds were taken care of it was time for the x-ray. Unfortunately, the x-ray machine was broken, so Thussi took us to the next hospital, which was just around the corner. When we got there, they were already expecting us, but nobody was speaking English, so we were basically using sign language to communicate. 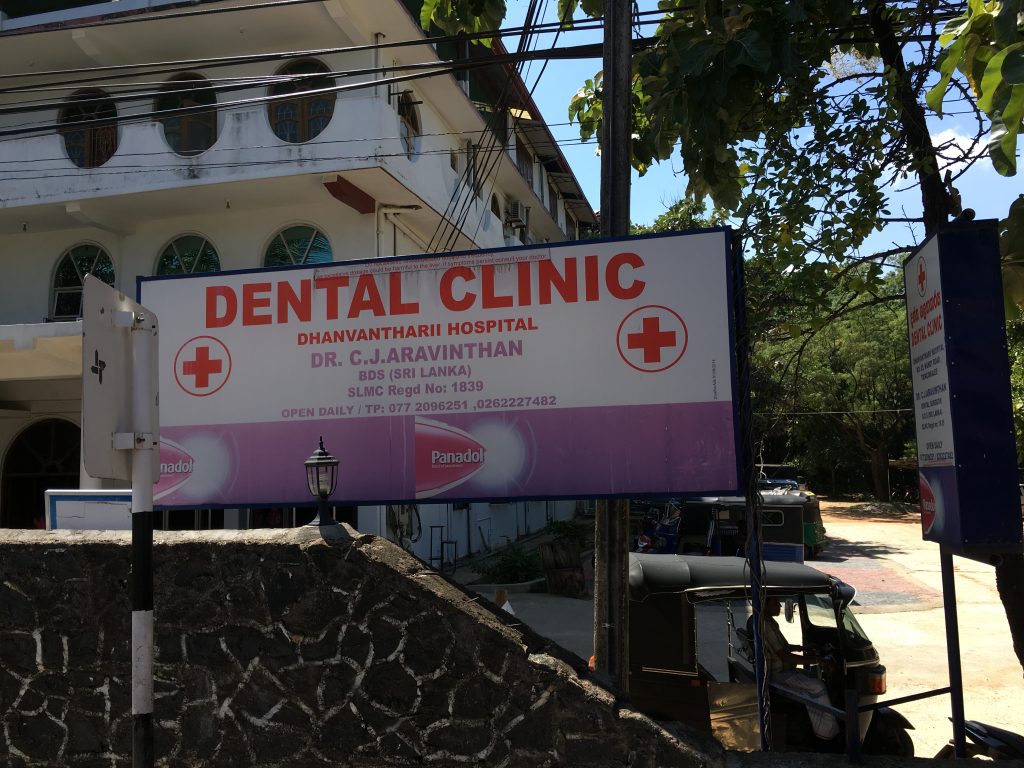 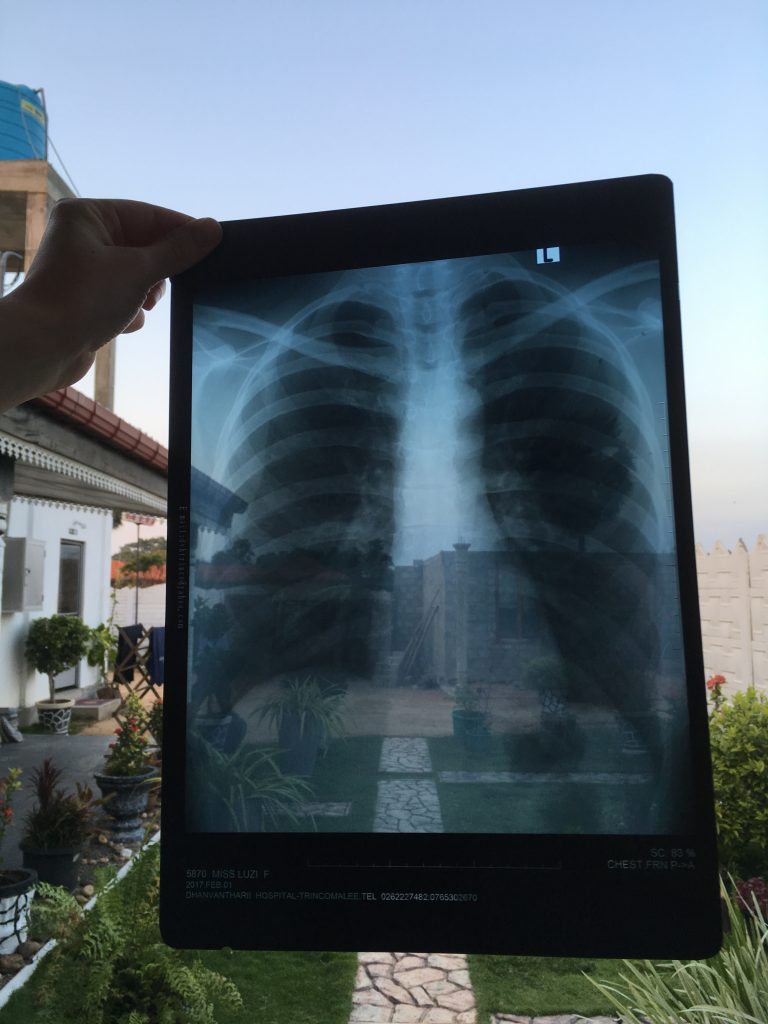 They asked me to sit down and wait. About 10 minutes later I was ordered into a little room, which was basically just the end of the hallway, separated by a curtain. Behind the curtain was a chair and two hospital gowns hanging over a piece of rope. I picked the slightly cleaner one and was pulled out from behind the curtain about 2 minutes later. I was directed to a room with ancient-looking equipment, stood in front of a piece of wood and had my picture taken. After 3 minutes I was done and asked to sit back down. One of the nurses gave me a small piece of paper with the number 750 written on it and pointed toward the entrance of the hospital. After some more nodding and pointing we figured out that this piece of paper was the bill and needed to be paid for me to actually get the x-ray. This is by far the cheapest x-ray I will ever get: the 750 was referring to rupees and converts into just under 5 euros.

While I was busy getting my picture taken, Thussi was getting my prescriptions from the other hospital. I good a pretty mix of colorful pills including antibiotics, painkillers and anti-inflammatories. They charged me about 2.500 rupees (about 15 euros) for 10 days of medication. 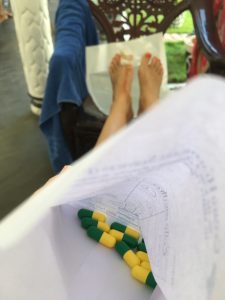 Since the radiologist was not in that day, Thussi went back to the hospital the next day with my x-ray to find out that my ribs were not broken – hooray 🙂 My foot took a long time to heal, but I spoke to some western doctors during the trip and they were all surprised how well the wound was healing considering the severity of the injury. So thanks a lot the capable staff of the Trincomalee hospital!

No comments yet
hospital trincomalee uppuveli 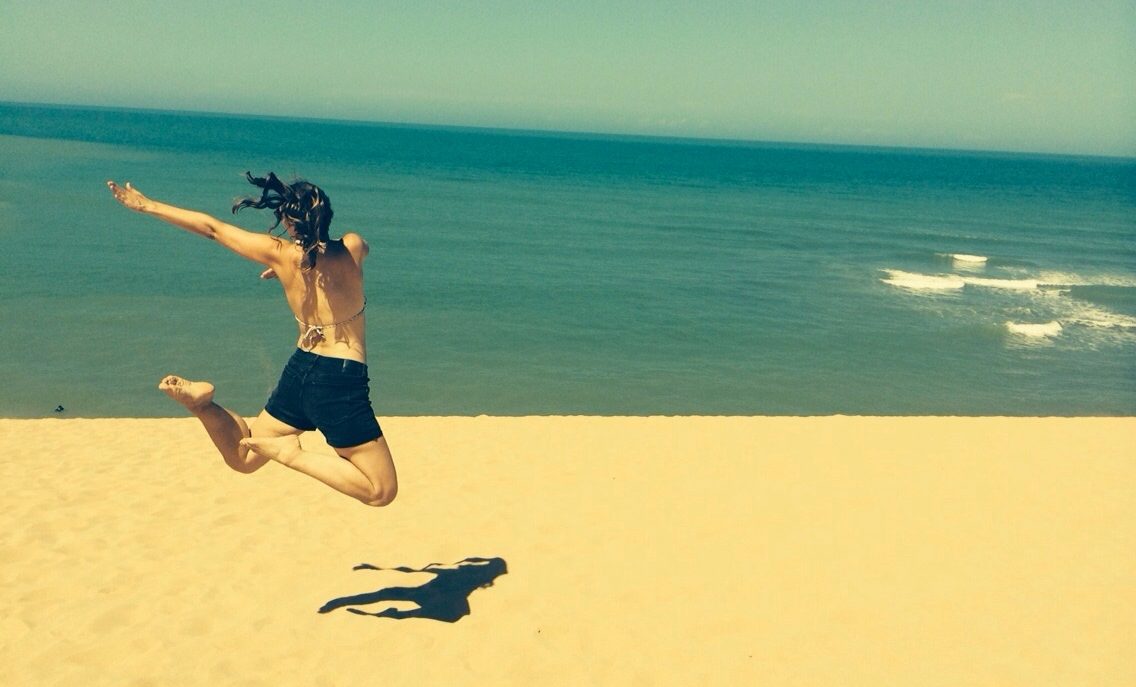 Hi.
I am Luzi, I am a travel addict and exploring the world has been my happy place ever since I can remember. I would love to share my journeys with you and inspire you to find your own happy places, moments and people.